Current and historical surface work shows a semi-continuous N-NE strike length of alteration and mineralization between the Five mile Brook South prospect to the Tidewater Prospect. Leocor will be working with GroundTruth exploration on the program which will unify the projects with a common soil database and holistically define what we expect to be a significant mineralized footprint.  The GroundTruth method breaks down the exploration process into phases, typically defined as follows:

The Baie Verte District is generally perceived to be at a  phase 1 stage but because of the more advanced status of certain parts of the project we have budgeted phases 2 and 3  with GT Probe, GT Rab holes, the locations of which are still to be planned.

The planned program is budgeted for 710,000 CA$ and consists of:

The distribution of planned work is illustrated in image 1. Image 1A shows ground magnetic lines, soil lines and IP lines over topography and relative to a selection of some of the more important mineral occurrences on the property. Image 1B shows the same data over the district geology. The Baie Verte peninsula is a prolific gold and base metal district and much of the gold in Newfoundland appears to have been deposited in a fairly tight window of time between 437 and 375 Ma. Many of the prospects are associated with extensive alteration/shear zones developed within a thrust-faulted sequence of quartz-Fe-carbonate-fuchsite-altered gabbros, ultramafics and mafic volcanics, of the Advocate (ophiolite) Complex, and intermediate to silicic volcaniclastics & tuffs and microgabbroic dykes/sills, of the Flatwater Pond (cover sequence) Group. The soil and magnetic lines are designed to be perpendicular to the north east strike of the lithologic, structural and alteration regime which controls the mineralization. 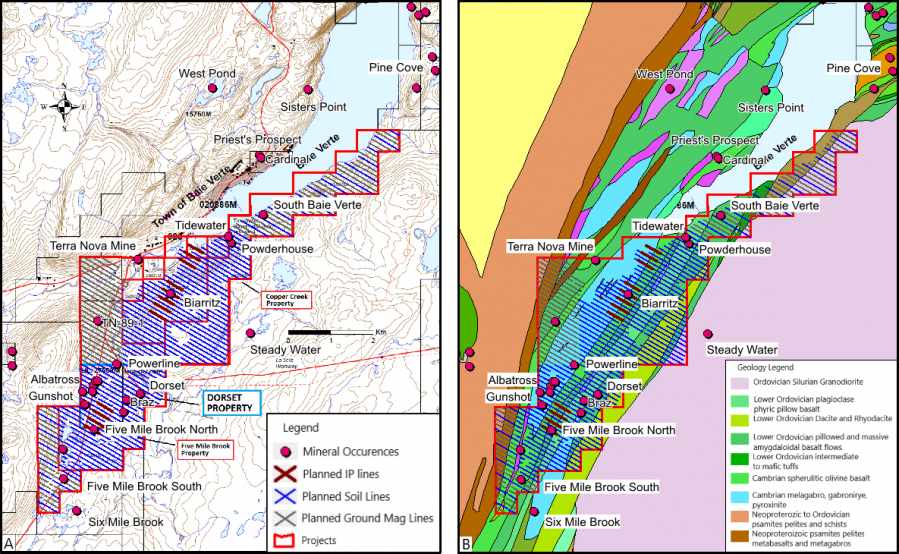 Over the past six months Company geologists have identified a significant zone of gold mineralization at the new Braz-NE trench site as well as an extensive gold-in-soil anomaly in the southwestern claims, from which a recent rock sample value of 1.23 grams-per-tonne (“g/t”) gold (“Au”) was obtained.

The most significant gold results, from the Braz-NE trench, illustrated in Image 2, were obtained from a 16.8 m wide section of a 57 m wide iron-carbonate alteration zone, where a total of 12 channel samples were collected.  Eight of these, from 20304 to 20311, returned a continuous section of highly anomalous gold results having a combined (average) grade of 1.69 g/t Au over 8m; the latter section includes two subzones yielding 1.47 g/t Au over 4m and 2.49 g/t over 3m.  Bounding this zone, to the northwest, is a 3.6m gap (of non-exposure) separating it from a 2.5m wide quartz vein rich zone where three channel samples 20301, 2 and 3 returned an average grade of 3.31 g/t Au over 2.5m. To the southeast of the 8m channel-sampled section, a 0.7 m gap of non-exposure, separates the latter from a 1.6m wide bedrock exposure 20311 returning 1.34 g/t Au over 1.6m. 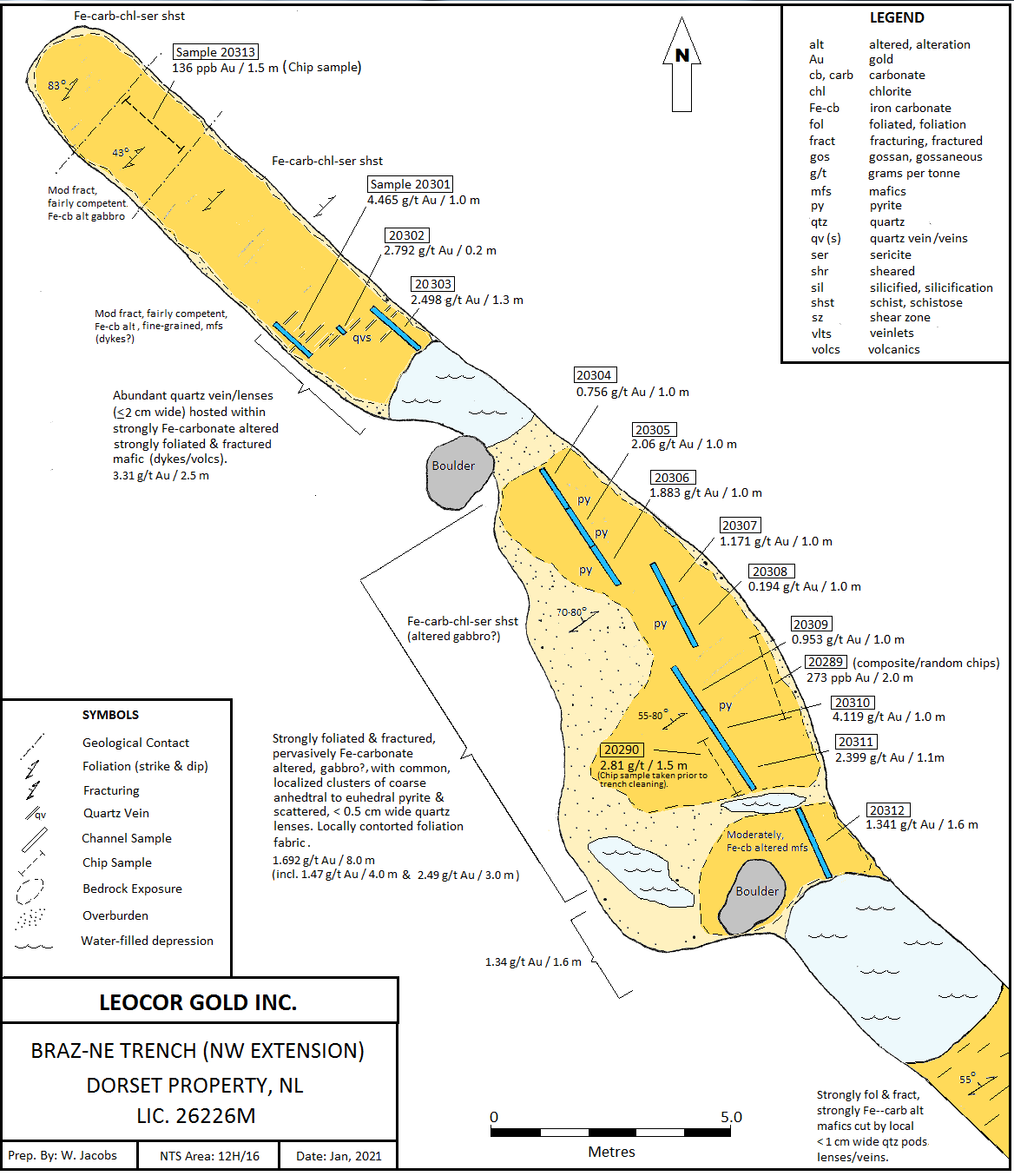 The Baie Verte Peninsula represents one of the more productive and historical gold and base metal mining districts in Canada.  The former Terra Nova base metal mine – one of several copper mines of the region, which operated during the late 1880’s to early 1900’s – lies 200 meters west of Leocor’s Copper Creek claims.  Former gold mining operations in the area include the Goldenville mine (of 1903-1906), located 8 km NE of the property, and the more recent Nugget Pond mine (1997-2000) of the eastern Baie Verte Peninsula area.  Currently producing mines in the area include the Rambler base metal-gold mine (1961-present), located 14 km ESE of Baie Verte, and the Pine Cove and Stogertite mines (collectively, 2011-present) located 1.6 km and 5.4 km NE of the current property.

Other zones include The Albatross, where historic rock sampling of mineralized zones returned values up to 30.3 g/t Au. Assay results from three 1987 diamond drill holes include 1.0 g/t Au over 7.3m, 1.81 g/t over 4.3m and 1.02 g/t over 2.2m and the Gunshot Zone, where veins containing visible gold and pyrite returned grab samples that assayed up to 162 g/t Au and channel samples that assayed up to 18 g/t Au over 0.4m (MacDougall, 1989)

Copper Creek (1,025-ha) hosts a number of gold prospects and copper occurrences associated with extensive alteration/shear zones developed within a thrust-faulted sequence of quartz-Fe-carbonate-fuchsite-altered gabbros, ultramafics and mafic volcanics, of the Advocate (ophiolite) Complex, and intermediate to silicic volcaniclastics & tuffs and microgabbroic dykes/sills, of the Flatwater Pond (cover sequence) Group. Historical results at Copper Creek – Biarritz zone include “values ranging from 1.3 to 16 g/t Au from grab samples and a combined assay of 3.9 g/t Au over 4.0m from detailed chip sampling.” Additionally, “300m SW along strike exposed a 5-10m shear zone with similar alteration returned which returned sporadic values up to 9,2 g/t Au from grab samples” Noranda drilled several diamond holes in the area including A-88-7 which returned 0.66 g/t Au over 1.5 m and A-88-9 which returned 3.11 g/t Au over 0.5 m.  (MacDougall, 1989).

Five Mile Brook (350-ha) has been subject to minimal exploration in the past but shows potentially important geological continuity to the Company’s Dorset Gold Project, which lies directly contiguous to the northern boundary.

The data reported here is historic in nature and has not yet been verified by a Qualified Person.  Leocor has relied on the information supplied in the Noranda assessment reports (quoted above) and from information found in MODS (Mineral Occurrence Data System) published by the Newfoundland Department of Natural Resources.

Dr. Paul David Robinson, P.Geo, is a qualified person as defined by National Instrument 43-101. Dr. Robinson supervised the preparation of the technical information in this news release.

This press release contains forward-looking information within the meaning of Canadian securities laws. Such information includes, without limitation, information regarding the terms and conditions of the Option. Although Leocor believes that such information is reasonable, it can give no assurance that such expectations will prove to be correct.

Forward looking information is typically identified by words such as: “believe”, “expect”, “anticipate”, “intend”, “estimate”, “postulate” and similar expressions, or are those, which, by their nature, refer to future events. Leocor cautions investors that any forward-looking information provided by Leocor is not a guarantee of future results or performance, and that actual results may differ materially from those in forward looking information as a result of various factors, including, but not limited to: the agreement of the parties to proceed with the proposed transaction on the terms set out in the Option Agreements or at all; Leocor’s ability to exercise the Options; the state of the financial markets for Leocor’s securities; the state of the natural resources sector in the event the Option, or any of them, are completed; recent market volatility; circumstances related to COVID-19; Leocor’s ability to raise the necessary capital or to be fully able to implement its business strategies; and other risks and factors that Leocor is unaware of at this time. The reader is referred to Leocor’s initial public offering prospectus for a more complete discussion of applicable risk factors and their potential effects, copies of which may be accessed through Leocor’s issuer page on SEDAR at www.sedar.com.