Vancouver, British Columbia – TheNewswire – July 6th, 2021 – Exploits Discovery Corp. (“Exploits” or the “Company”) (CSE:NFLD) (OTC:NFLDF) (FSE:634-FF) (CNSX:NFLD.CN) is pleased to announce the Company has completed its first phase of airborne VTEM geophysics across the Dog Bay, Jonathan’s Pond, Mt. Peyton, True Grit, and Middle Ridge properties, comprising 12,420 line kilometres flown – one of the largest high resolution surveys on Newfoundland to date. Early results from the data have proven the necessity for high resolution geophysics, and a second phase has been approved to cover the remaining ground at the Great Bend Project, scheduled to begin mid-July.

William M. Sheriff, Interim President & Chief Executive Officer of Exploits, comments “VTEM survey data allows us and our technical team led by GoldSpot Discoveries to pinpoint targets in a way that is impossible with traditional prospecting techniques. The speed at which we can analyze vast areas is unprecedented and gives our geology team discrete areas to visit for exploration and sampling. This is our competitive advantage in advancing new targets and moving Exploits quickly towards discovery.”

Preliminary data was provided as the survey was being flown and interpreted in real time by Exploits and the Company’s partner, GoldSpot Discoveries Corp. This resulted in an acceleration of target development through highlighting areas of interest in the data, followed by dedicating on the ground exploration efforts to these specific target locations. This has increased time spent on high priority targets and filtering lower priority areas. To date, the results of the VTEM survey have delineated targets at the Schooner Fault Zone, Quinlan Veins, Jonathan’s Pond, and True Grit prospects. These targets received follow up, on the ground field exploration and are now in the process of being drill tested. 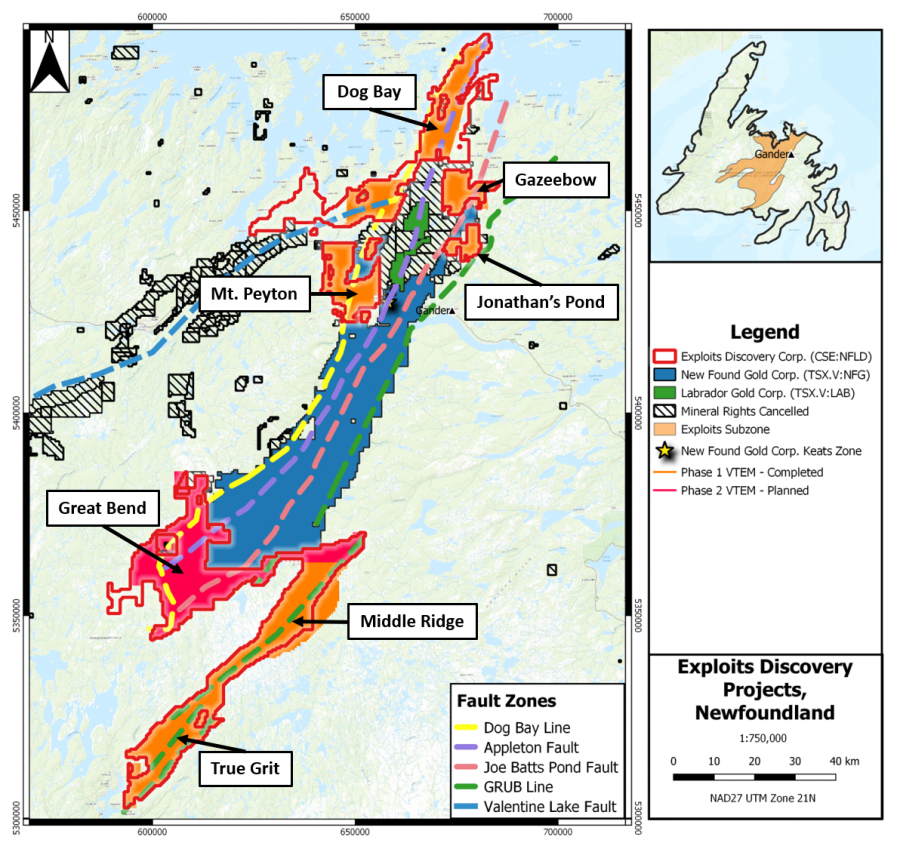 Figure 1: Regional map of Exploits’ projects with the completed Phase 1 airborne VTEM area in orange and the planned Phase 2 survey over Great Bend, including the southern portion of the Dog Bay Line, Appleton, and Joe Batts Pond (JBP) Fault Zones.

Ongoing data analysis is being conducted as the final data is received with potential to increase Exploits’ targets for building into new drill ready targets. With the success of the first phase of the VTEM survey, the Company has planned and approved a second phase. The second phase will cover the Great Bend Project which includes approximately 30-kilometers of the Dog Bay Line, 18-kilometers of the Appleton, and 18-kilometres of the Joe Batts Pond Fault Zones, with New Found Gold’s till anomalies southwest of Eastern Pond trending towards the project along the Appleton Fault Zone.

About the VTEM Geophysical Survey

Prior to the Company undertaking the district scale, 12,420 line kilometre airborne VTEM geophysical survey, the Exploits Subzone was only covered by a patchwork of widely spaced/lower resolution geophysical data. To understand the geological and structural controls over this large area, greater coverage at tightly spaced lines for increased data resolution was imperative. Versatile Time Domain Electromagnetic (VTEM) surveys provide electromagnetic and magnetic data which help delineate these geological and structural controls, highlighting favourable areas for deposition of epizonal style orogenic gold. The equipment is fixed to a helicopter flying at 100 metre line spaces at a low mean altitude of 85 metres, which allow for large areas to be surveyed quickly, with high quality data resolution.

Ian Herbranson, P.Geo, is Vice-President of Exploration for the Company and qualified person as defined by National Instrument 43-101. Mr. Herbranson supervised the preparation of the technical information in this news release.

With five permitted drill targets, ample cash reserves, a drill working and committed through the 2021 season, Exploits is positioned for discovery.

Exploits believes that the Exploits Subzone Gold Belt, which runs 200 km from Dog Bay southwest to Bay d’Espoir, has been neglected since the last major exploration campaigns in the 1980s. The last 40 years have seen incremental advancements in the understanding of gold mineralization in the camp. The sum of this knowledge is now coming together in discrete and effective exploration models that have delivered results including New Found Gold’s 2019 discovery hole. The Exploits Subzone and GRUB regions have been the focus of major staking and financing since late 2019.

The team at Exploits, with significant local experience and knowledge, have studied the entirety of the Exploits Subzone and surrounding regions, and have picked individual land packages for staking or joint ventures, where there are opportunities for world class discoveries and mine development. Exploits intends to leverage its local team and the larger shift in geologic understanding and become one of the most extensive explorers in the Exploits Subzone.

ON BEHALF OF THE BOARD
/s/ “William M. Sheriff ”
Interim President and CEO

Exploits Discovery would like to acknowledge the financial support of the Junior Exploration Assistance Program from the Department of Natural Resources, Government of Newfoundland and Labrador.