TORONTO, ON / ACCESSWIRE / July 8, 2021 / Anaconda Mining Inc. (“Anaconda” or the “Company”) (TSX:ANX) (OTCQX:ANXGF) is pleased to announce plans for an exploration program for the summer and fall of 2021 near the Company’s wholly owned Point Rousse operation (“Point Rousse”) in the Baie Verte Mining District of Newfoundland. The $1.5 million exploration program, funded from the recent $8.5 million flow-through financing, consists of 100-line kilometres of a ground Induced Polarization (“IP”) geophysical survey to aid in defining drill targets in three priority target areas, followed up by an initial 6,000 metres of diamond drilling. The priority targets in the Scrape Trend and the Goldenville Trend are located within 3.5 kilometers of the operating Pine Cove Mill and Tailings storage facility, and the Deer Cove Trend targets are within 9 kilometers (Exhibit A). All targets have the potential to continue to extend the mine life at the Point Rousse operation.

Highlights of the prospective targets include:

“We are excited to initiate a robust exploration program at Point Rousse within proximity of our operating mill and tailings facility, where we have made two discoveries in the past five years which continue to extend the mine life of our Point Rousse operation. These discoveries have brought a renewed geological and exploration approach to the Baie Verte peninsula which has identified further exciting prospective opportunities for potential discovery. This program will focus on what are known as the Scrape Trend, the Goldenville Trend, and the Deer Cove Trend, and is in addition to ongoing infill and expansion drilling at Stog’er Tight, where we continue to announce encouraging results and have commenced certain permitting activities. Our goal is to continue to extend our production profile at Point Rousse, where current mining is from the Argyle Deposit to the east of the Pine Cove Mill. Anaconda Mining is uniquely positioned in Newfoundland, the site of significant interest in gold exploration, as we are able to leverage our existing infrastructure being the only gold producer on the island.”

The $1.5 million dollar exploration program will be funded primarily from the recent $8.5 million flow-through financing. The program will consist of 6,000 metres of diamond drilling that will target areas of potential discovery along the Scrape and Deer Cove Trends as well as the Pumbly Point, Corkscrew and Big Bear targets within the Goldenville Trend, and will also include a 100-line kilometre ground IP survey to refine priority targets for follow-up drill testing in an area between the past-producing Pine Cove and Stog’er Tight mines and in the Goldenville Trend, where recent and historical exploration has outlined significant zones of gold mineralization.

There exists a 2.5-kilometre long section of highly prospective rocks between the past-producing Pine Cove Mine and the Stog’er Tight Deposit, including existing geochemical and geophysical anomalies, which have yet to be tested by systematic exploration. This section includes the Animal Pond and Pine Cove East prospects.

The Animal Pond prospect comprises an up to 42-metre wide zone of altered gabbro with quartz stockwork veining and disseminated pyrite that is similar to the Stog’er Tight Deposit mineralizing environment. Previous sampling at Animal Pond by the Company in 2004 include grab sample assays of up to 61.5 g/t gold and chip samples assaying up to 3.96 g/t gold over 5.2 metres. An initial drill program in 2005 consisting of five (5) diamond drill holes encountered broad zones (>20 m) of Stog’er Tight-style alteration intersecting weakly anomalous gold.

At Pine Cove East, the Company recently completed an initial diamond drilling program which intersected rocks and alteration similar to that hosting the Pine Cove Deposit, which was mined over a 10-year period. The successful intersection of Pine Cove-style host rocks and alteration strongly support follow-up exploration in this area. Assay results for the initial drilling are pending and will be reported when assays become available.

The Goldenville Trend comprises three separate mineralized zones – Pumbly Point, Corkscrew and Big Bear – that form a zone with a 2.3 kilometre strike length that has the potential to host gold mineralization.

As announced in May 2021, initial drilling at Pumbly Point intersected a gold-mineralized structure along a 500-metre trend, which included an intersection of 1.89 g/t gold over 7.8 metres (57.2 to 65.0 metres), including 10.60 g/t gold over 0.8 metres, and an intersection of 1.42 g/t gold over 4.0 metres (40.2 to 44.2 metres). The mineralized structure at Pumbly Point is a level of stratigraphy believed to be coincident with the Goldenville Horizon, a prospective geological sequence equivalent to the highly prospective Nugget Pond Horizon located at the Company’s Tilt Cove Gold Project. A broader area of prospectivity could be open for further testing should this stratigraphy and structure continue. Another 1,000 metres of diamond drilling are planned to test the additional 850 metres of target along strike at Pumbly Point and plans are being developed to follow up on the wide, high grade drill results to date which were intersected in the western most extent of the tested area.

At the Corkscrew target, gold is hosted within a minimum 400 metre long altered, quartz veined and pyrite bearing granodiorite that is between 40 and 100 metres thick. Historic drilling, between 1987 and 2009, was completed over a 325-metre strike extent, which is open in all directions, and intersected several zones of gold mineralization with highlight assays as follows:

The Big Bear Prospect is located 500 metres northeast of Corkscrew and hosted within similarly altered and mineralized granodiorite characterized by quartz veins and disseminated pyrite. Historic chip samples from this zone returned 1.60 g/t gold over 4.0 metres and grabs samples assayed up to 8.23 g/t gold. Broad spaced drilling (40 to 125 metres) in four holes completed in 2009 returned anomalous gold intervals assaying up to 2.28 g/t gold over 1.3 metres (56.5 to 57.8 metres) in diamond drillhole M-09-31.

The Deer Cove Trend consists of a zone of prospective rocks approximately 3.5 kilometres in strike length centered along the Deer Cove Thrust fault and includes the Deer Cove deposit as well as various other showings and prospects. The Deer Cove Thrust is an analogous structure to the Scrape Thrust that is located proximal and within the footwall of both the Pine Cove and Argyle Deposits and is considered genetically linked to the formation of those gold deposits.

The Company believes that the Deer Cove Trend has the strong potential to host additional zones of gold mineralization, specifically within the hanging wall of the thrust fault, and similar in style to the Pine Cove, Stog’er Tight or Argyle mines. The exploration program for 2021, including diamond drilling, will be designed to test this concept.

This news release has been reviewed and approved by Paul McNeill, P.Geo., VP Exploration with Anaconda Mining Inc., a “Qualified Person”, under National Instrument 43-101 Standard for Disclosure for Mineral Projects.

Widths from drill core intervals, chip and channel samples reported in this press release are presented as core lengths only. True widths are unknown. All quoted drill core sample intervals, grades and production statistics have been compiled from historic assessment reports obtained from the Government of Newfoundland and Labrador. “Grab samples” are selected samples and are not necessarily indicative of mineralization that may be hosted on the property.

Anaconda Mining is a TSX and OTCQX-listed gold mining, development, and exploration company, focused in the top-tier Canadian mining jurisdictions of Newfoundland and Nova Scotia. The Company is advancing the Goldboro Gold Project in Nova Scotia, a significant growth project with Measured and Indicated Mineral Resources of 1.9 million ounces (16.0 million tonnes at 3.78 g/t) and Inferred Mineral Resources of 0.8 million ounces (5.3 million tonnes at 4.68 g/t) (Please see The Goldboro Gold Project Technical Report dated March 30, 2021), which is subject to an ongoing feasibility study. Anaconda also operates mining and milling operations in the prolific Baie Verte Mining District of Newfoundland which includes the fully-permitted Pine Cove Mill, tailings facility and deep-water port, as well as ~15,000 hectares of highly prospective mineral property, including those adjacent to the past producing, high-grade Nugget Pond Mine at its Tilt Cove Gold Project.

This news release contains “forward-looking information” within the meaning of applicable Canadian and United States securities legislation. Generally, forward-looking information can be identified by the use of forward-looking terminology such as “plans”, “expects”, or “does not expect”, “is expected”, “budget”, “scheduled”, “estimates”, “forecasts”, “intends”, “anticipates”, or “does not anticipate”, or “believes” or variations of such words and phrases or state that certain actions, events or results “may”, “could”, “would”, “might”, or “will be taken”, “occur”, or “be achieved”. Forward-looking information is based on the opinions and estimates of management at the date the information is made, and is based on a number of assumptions and is subject to known and unknown risks, uncertainties and other factors that may cause the actual results, level of activity, performance or achievements of Anaconda to be materially different from those expressed or implied by such forward-looking information, including risks associated with the exploration, development and mining such as economic factors as they effect exploration, future commodity prices, changes in foreign exchange and interest rates, actual results of current production, development and exploration activities, government regulation, political or economic developments, environmental risks, permitting timelines, capital expenditures, operating or technical difficulties in connection with development activities, employee relations, the speculative nature of gold exploration and development, including the risks of diminishing quantities of grades of resources, contests over title to properties, and changes in project parameters as plans continue to be refined as well as those risk factors discussed in Anaconda’s Annual Information Form for the year ended December 31, 2020, available on www.sedar.com. Although Anaconda has attempted to identify important factors that could cause actual results to differ materially from those contained in forward-looking information, there may be other factors that cause results not to be as anticipated, estimated or intended. There can be no assurance that such information will prove to be accurate, as actual results and future events could differ materially from those anticipated in such information. Accordingly, readers should not place undue reliance on forward-looking information. Anaconda does not undertake to update any forward-looking information, except in accordance with applicable securities laws. 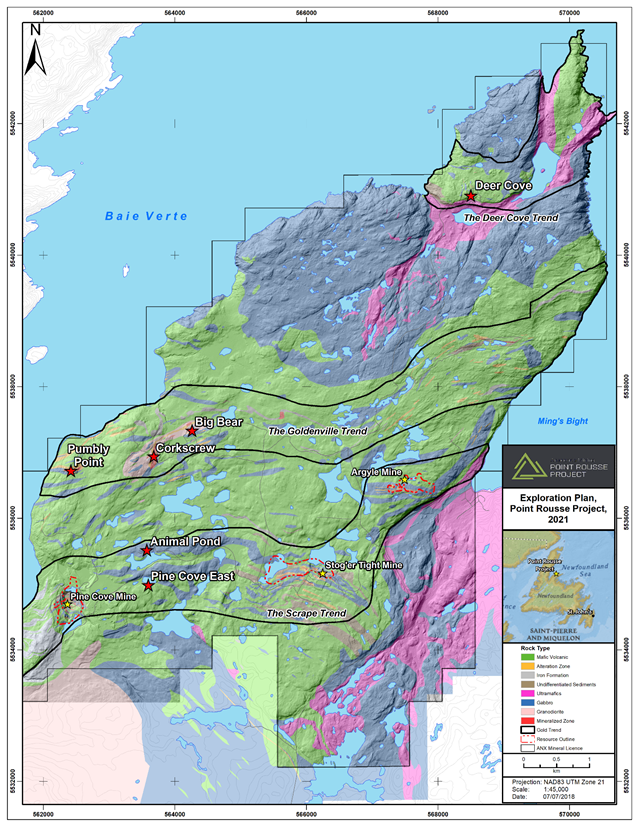 Exhibit A. A map showing the location of areas of interest to be explored and drilled during the Exploration Program including the Scrape and Deer Cove Trends and the Pumbly Point-Corkscrew area of the Goldenville Trend.